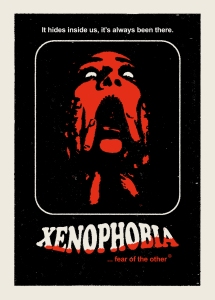 When we speak of a “phobia”, we need to understand that it is a DISORDER. Something is WRONG. As I recently spent time with people in the inner city of Durban, I observed that something is indeed SERIOUSLY wrong!

It has happened before. It is happening again. Violence, theft and intimidation of a shocking degree are being directed at foreigners.

The “smoke” that I have seen and heard is that:

– There are too many unemployed locals, and foreigners are occupying positions that locals would normally have taken.

– Foreigners are running organised crime syndicates such as drug trafficking.

I don’t want to stir a debate on this. I want to ask: how do we FIX this?

Chasing every immigrant home won’t employ our unemployed. The problem is WAY bigger.

Violence, looting and intimidation won’t solve the problems – instead, they have created a number of new ones!

I believe there are two raging fires causing the smoke.

The most obvious fire is WIDESPREAD UNEMPLOYMENT. Having been unemployed, I can tell you that unemployment cause more problems than the obvious one of lack of income. It demoralises. It breeds desperation – “desperate times call for desperate measures”. It results in a large group of stressed-out people who have time on their hands and little to lose. We HAVE TO find ways to generate employment on a LARGE SCALE – and provide for the unemployed while they seek work.

The less obvious fire is something far deeper – an inner condition called SELF-CENTREDNESS. Truth be told, I am more interested in ME than in you. I am more interested in ME getting a job/meal/grant/home than you. If you are in front of me in the queue, you are in my way – so if I can get rid of you, I will move forward in the queue. If you give me an acceptable excuse to justify my queue-jumping, I will do what it takes to do so. “Xenophobia” is just one of those excuses.

This is such a difficult fire to extinguish. It blazes powerfully, but it is DEEPLY HIDDEN. We learn to “blow away the smoke” by saying we believe in unity and community… by justifying our actions with accepted excuses… and by having meetings to discuss “the problem” (trust me; it won’t be to confess our self-centredness). The smoke is blown away from us, but the fire continues to burn.

Our only hope is to experience personal revelation of that fire in our hearts. When we ADMIT it, we can CONFRONT it and DEAL with it. We can’t overcome what we refuse to confront!

God has made, and kept, a remarkable promise – to change our hearts and to give us new lives and to set us free from our self-centredness. He has done this for many. Thousands upon thousands will testify to it, including myself.

I have sat together with an ex-MK operative and an ex-AWB operative. I heard them admit to the lies they had believed and the actions they had excused with them. I witnessed two men, previously mortal enemies, being reconciled as brothers.

The key? They had both gained new life through faith in Jesus.

It can be yours.

It can be OURS!

Let’s “call it like it is”. Let’s stop “blowing smoke” and confront the root.

God helping us, we can do it!